verb (used with object)
1. to throw, cast, or hurl with force or violence.
2. to move (oneself) violently with impatience, contempt, or the like.
3. to put suddenly or violently.
4. to project or speak sharply, curtly, or forcefully.
5. to involve (oneself) vigorously in an undertaking.
6. to move, do, or say (something) quickly.
7. to send suddenly and rapidly.
8. to throw aside or off.
9. to throw to the ground, as in wrestling or horseback riding.
–verb (used without object)
10. to move with haste or violence; rush; dash.
11. to fly into violent and irregular motions, as a horse; throw the body about, as a person.
12. to speak harshly or abusively (usually followed by out .
–noun
13. an act of flinging.
14. a short period of unrestrained pursuit of one's wishes or desires.
15. an attempt at something.
16. a critical or contemptuous remark; gibe.
17. Also called Highland fling. a lively Scottish dance characterized by flinging movements of the arms and legs. 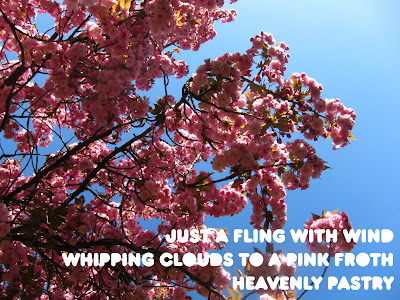 Just a fling with wind
Whipping clouds to a pink froth
Heavenly pastry
Posted by spacedlaw at Sunday, April 17, 2011