–noun
1. a cloudlike aggregation of minute globules of water suspended in the atmosphere at or near the earth's surface, reducing visibility to a lesser degree than fog.
2. a cloud of particles resembling this.
3. something that dims, obscures, or blurs: the mist of ignorance.
4. a haze before the eyes that dims the vision.
5. a suspension of a liquid in a gas.
6. a drink of liquor served over cracked ice.
7. a fine spray produced by a vaporizer to add moisture to the air for breathing.
–verb (used without object)
8. to become misty.
9. to rain in very fine drops; drizzle (usually used impersonally with it as subject):.
–verb (used with object)
10.to make misty.
11.to spray (plants) with a finely diffused jet of water, as a means of replacing lost moisture. 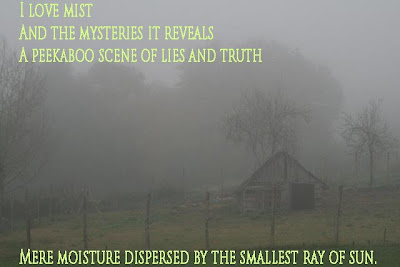 I love mist
And the mysteries it reveals
A peekaboo scene of lies and truth
Mere moisture dispersed by the smallest ray of sun.
Posted by spacedlaw at Friday, January 02, 2009

I love mist.
My favourite time for walking.