–noun
1. a structure spanning and providing passage over a river, chasm, road, or the like.
2. a connecting, transitional, or intermediate route or phase between two adjacent elements, activities, conditions, or the like: Working at the hospital was a bridge between medical school and private practice.
3. Nautical.
a. a raised transverse platform from which a power vessel is navigated: often includes a pilot house and a chart house.
b. any of various other raised platforms from which the navigation or docking of a vessel is supervised.
c. a bridge house or bridge superstructure.
d. a raised walkway running fore-and-aft.
4. Anatomy. the ridge or upper line of the nose.
5. Dentistry. an artificial replacement, fixed or removable, of a missing tooth or teeth, supported by natural teeth or roots adjacent to the space.
6. Music.
a. a thin, fixed wedge or support raising the strings of a musical instrument above the sounding board.
b. a transitional, modulatory passage connecting sections of a composition or movement.
c. (in jazz and popular music) the contrasting third group of eight bars in a thirty-two-bar chorus; channel; release.
7. Also, bridge passage. a passage in a literary work or a scene in a play serving as a movement between two other passages or scenes of greater importance.
8. Ophthalmology. the part of a pair of eyeglasses that joins the two lenses and rests on the bridge or sides of the nose.
9. Also called bridge circuit. Electricity. a two-branch network, including a measuring device, as a galvanometer, in which the unknown resistance, capacitance, inductance, or impedance of one component can be measured by balancing the voltage in each branch and computing the unknown value from the known values of the other components.
10.Railroads. a gantry over a track or tracks for supporting waterspouts, signals, etc.
11.Building Trades. a scaffold built over a sidewalk alongside a construction or demolition site to protect pedestrians and motor traffic from falling materials.
12.Metallurgy.
a. a ridge or wall-like projection of fire brick or the like, at each end of the hearth in a metallurgical furnace.
b. any layer of partially fused or densely compacted material preventing the proper gravitational movement of molten material, as in a blast furnace or cupola, or the proper compacting of metal powder in a mold.
13.(in a twist drill) the conoid area between the flutes at the drilling end.
14.Billiards, Pool.
a. the arch formed by the hand and fingers to support and guide the striking end of a cue.
b. a notched piece of wood with a long handle, used to support the striking end of the cue when the hand cannot do so comfortably; rest.
15.transitional music, commentary, dialogue, or the like, between two parts of a radio or television program.
16.Theater.
a. a gallery or platform that can be raised or lowered over a stage and is used by technicians, stagehands, etc., for painting scenery (paint bridge), arranging and supporting lights (light bridge), or the like.
b. British. a part of the floor of a stage that can be raised or lowered.
17.Horology. a partial plate, supported at both ends, holding bearings on the side opposite the dial.
18.Chemistry. a valence bond illustrating the connection of two parts of a molecule.
19.a support or prop, usually timber, for the roof of a mine, cave, etc.
20.any arch or rooflike figure formed by acrobats, dancers, etc., as by joining and raising hands.
–verb (used with object)
21.to make a bridge or passage over; span
22.to join by or as if by a bridge: a fallen tree bridging the two porches.
23.to make (a way) by a bridge.
–verb (used without object)
24.Foundry. (of molten metal) to form layers or areas heterogeneous either in material or in degree of hardness.
–adjective
25.(esp. of clothing) less expensive than a manufacturer's most expensive products.
—Idiom
26.burn one's bridges (behind one), to eliminate all possibilities of retreat; make one's decision irrevocable 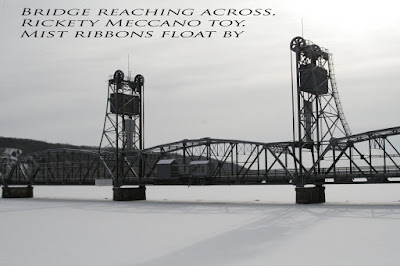 I will now have the Simon and Garfunkel song in my head all day. :)