–verb (used with object)
1. to put (something) aside and replace it by another or others; change or exchange.
2. to transfer from one place, position, person, etc., to another.
3. Automotive. to change (gears) from one ratio or arrangement to another.
4. Linguistics. to change in a systematic way, especially phonetically.
–verb (used without object)
5. to move from one place, position, direction, etc., to another.
6. to manage to get along or succeed by oneself.
7. to get along by indirect methods; use any expediency, trick, or evasion to get along or succeed.
8. to change gears in driving a vehicle.
9. Linguistics. to undergo a systematic, especially phonetic, change.
10.to press a shift key, as on a typewriter keyboard.
11.Archaic. to change one's clothes.
–noun
12.a change or transfer from one place, position, direction, person, etc., to another.
13.a person's scheduled period of work, especially the portion of the day scheduled as a day's work when a shop, service, office, or industry operates continuously during both the day and night.
14.a group of workers scheduled to work during such a period.
15.Baseball. a notable repositioning by several fielders to the left or the right of their normal playing position, an occasional strategy against batters who usually hit the ball to the same side of the field.
16.Automotive. a gearshift.
17.Clothing.
a. a straight, loose-fitting dress worn with or without a belt.
b. a woman's chemise or slip.
18.Football. a lateral or backward movement from one position to another, usually by two or more offensive players just before the ball is put into play.
19.Mining. a dislocation of a seam or stratum; fault.
20.Music. a change in the position of the left hand on the fingerboard in playing a stringed instrument.
21.Linguistics.
a. a change or system of parallel changes that affects the sound structure of a language, as the series of related changes in the English vowel system from Middle English to Modern English.
b. a change in the meaning or use of a word.
22.an expedient; ingenious device.
23.an evasion, artifice, or trick.
24.change or substitution.
25.Bridge. shift bid: a bid in a suit different from the suit just bid by one's partner. .
26.Agriculture. (in crop rotation)
a. any of successive crops.
b. the tract of land used.
27.an act or instance of using the shift key, as on a typewriter keyboard. 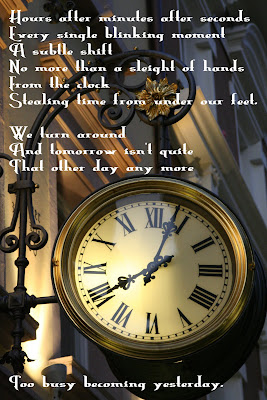 Hours after minutes after seconds
Every single blinking moment
A subtle shift
No more than a sleight of hands
From the clock
Stealing time from under our feet.

We turn around
And tomorrow isn't quite
That other day any more
Too busy becoming yesterday.
Posted by spacedlaw at Sunday, November 01, 2009

Email ThisBlogThis!Share to TwitterShare to FacebookShare to Pinterest
Labels: One single impression

Each moment becomes a past. I like this verse for depicting that.

this was good! :) thank u for the wonderful theme this week Nathalie! :)

Like I said over at OSI, I really enjoyed this, this is a different type of prompt and it was very inspiring. Thank you ... The clock is beautiful!


Join the fun at Acrostic Only!

That time just won't slow down, will it? Great words.

For me, you have written a biography of October. Wonderful poem. Thanks for this prompt.

No matter how hard we try, we just can't stop the hands of time. Beautifully expressed! Thanks for the great prompt. :~)

Love your poem, and the picture. The last line especially pleased me, as how often we are truly too busy with our time! Great job!

It is amazing how some time shifts like a blink of an eye.

this is the perfect inspiration to be living our lives fully!

Thanks for the prompt - and the wonderful poetry!

Sorry to have confused Amity..lol!!

Oh so subtle and profound. I reread and reread to grasp the different meanings here. I love it.

Excellent choice of prompt- thanks! Your poem is rather haunting- so true as life keeps shifting away...

'Too busy becomeing yesterday.' I did that last week for OSI. I could not write today so I wrote yesterday and tomorrow.

Your poem makes me think of how subtly time passes.

Your list of definitions is good. Did you notice that #'s 10 and 27 are the same in meaning? And wouldn't you know it, mine was only three down.

This was a very nice prompt, thank you. Isn't it fun to see what people will write using your prompt!
..

Thank you Natalie for the wonderful OSI prompt. The verses you have written are beautiful...especially "we turn around and tommorrow isn't quite the other day any more"

time flies on silent wings. this beautiful piece was a reminder to immerse in every fleeting moment.
Thank you also for the evocative prompt!

So true 'a sleight of hands',
stolen so fast! It is emotion
evoking. Don't waste any moments!