-verb
1. to distress or be distressed; worry
2. to rub or wear away
3. to irritate or be irritated; feel or give annoyance or vexation
4. to eat away or be eaten away by chemical action; corrode
5. (intr.) (of a road surface) to become loose so that potholes develop; scab
6. to agitate (water) or (of water) to be agitated
7. (trans.) to make by wearing away; erode
-noun
8. a state of irritation or anxiety
9. the result of fretting; corrosion
10. a hole or channel caused by fretting

-noun
1. a repetitive geometrical figure, especially one used as an ornamental border
2. such a pattern made in relief and with numerous small openings; fretwork
3. heraldry . a charge on a shield consisting of a mascle crossed by a saltire
-verb
4. (trans.) to ornament with fret or fretwork

-noun
any of several small metal bars set across the fingerboard of a musical instrument of the lute, guitar, or viol family at various points along its length so as to produce the desired notes when the strings are stopped by the fingers 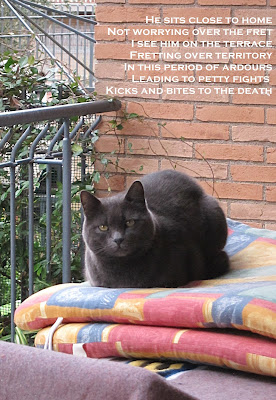