-verb
1. to gleam or cause to gleam brightly
-noun
2. a bright gleam or flash
3. brightness or gloss
4. a brief indication 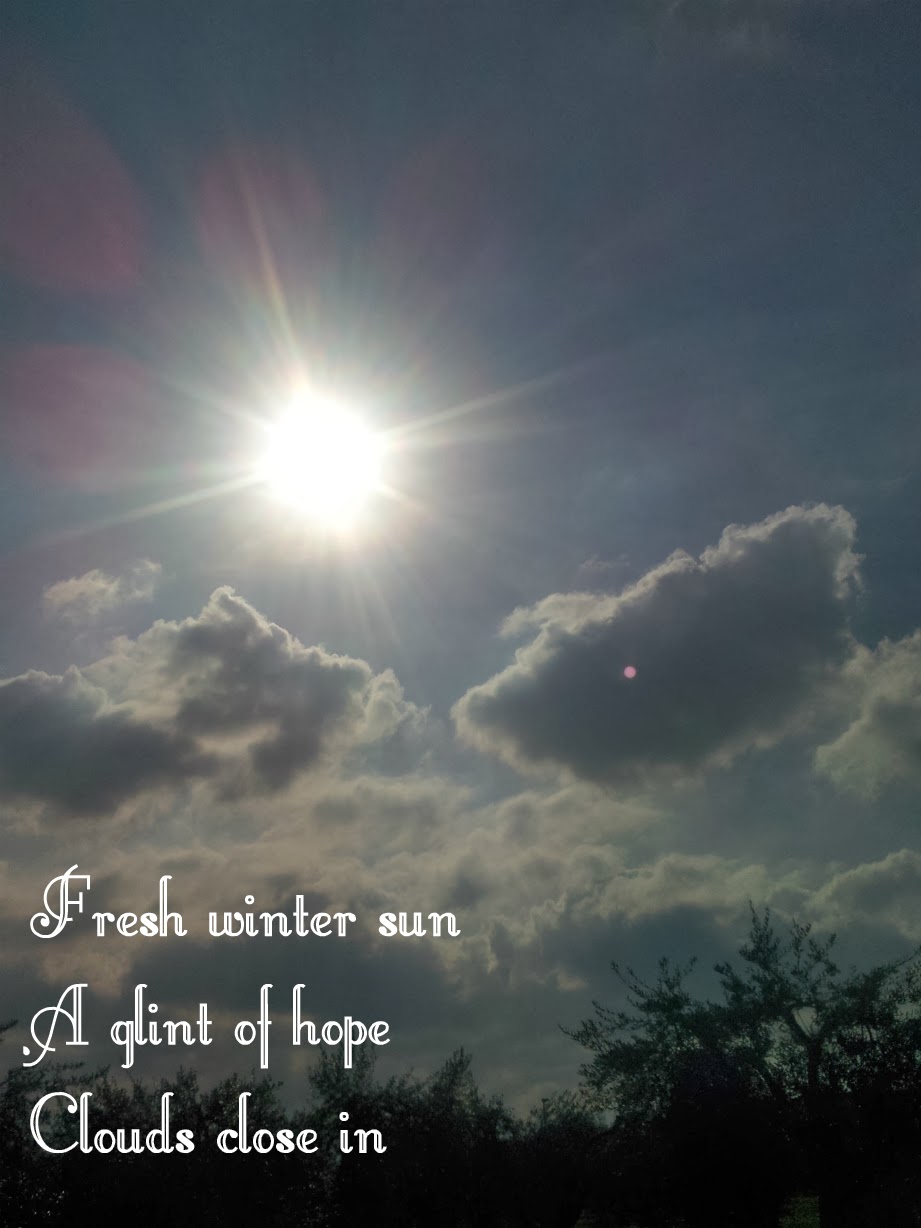 Fresh winter sun
A glint of hope
Clouds close in

Posted by spacedlaw at Friday, February 28, 2014 No comments: Links to this post

-noun
1. the mark or trail left by something that has passed by
2. any road or path affording passage, especially a rough one
3. a rail or pair of parallel rails on which a vehicle, such as a locomotive, runs, especially the rails together with the sleepers, ballast, etc., on a railway
4. a course of action, thought, etc.
5. a line of motion or travel, such as flight
6. an endless jointed metal band driven by the wheels of a vehicle such as a tank or tractor to enable it to move across rough or muddy ground
7. (physics) the path of a particle of ionizing radiation as observed in a cloud chamber, bubble chamber, or photographic emulsion
8. a course for running or racing
9. (US & Canadian)
a. sports performed on a track
b. track and field events as a whole
10. a path on a magnetic recording medium, especially magnetic tape, on which information, such as music or speech, from a single input channel is recorded
11. any of a number of separate sections in the recording on a record, CD, or cassette
12. a metal path that makes the interconnections on an integrated circuit
13. the distance between the points of contact with the ground of a pair of wheels, such as the front wheels of a motor vehicle or the paired wheels of an aircraft undercarriage
14. a hypothetical trace made on the surface of the earth by a point directly below an aircraft in flight
-verb
15. to follow the trail of (a person, animal, etc.)
16. to follow the flight path of (a satellite, spacecraft, etc.) by picking up radio or radar signals transmitted or reflected by it
17. (US, railways)
a. to provide with a track
b. to run on a track of (a certain width)
18. (of a camera or camera operator) . to follow (a moving object) in any direction while operating
19. to move (a camera) towards the scene (in) or away from the scene (out)
20. to follow a track through (a place)
21. (intr.) (of the pick-up, stylus, etc., of a record player) to follow the groove of a record 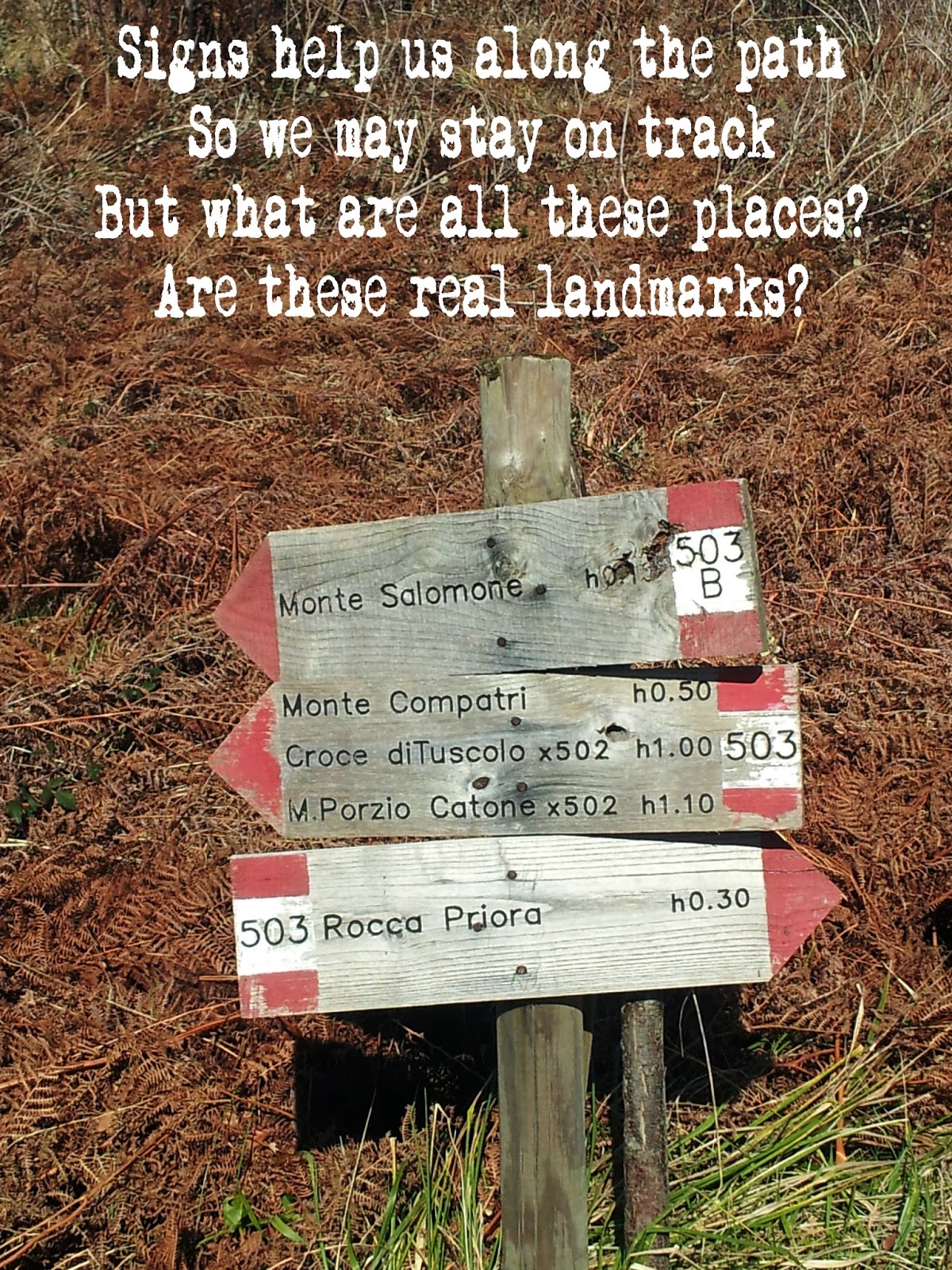 Signs help us along the path
So we may stay on track
But what are all these places?
Are these real landmarks?

Posted by spacedlaw at Thursday, February 27, 2014 No comments: Links to this post

-noun
1.  a sign or indication of a future event, especially a momentous or calamitous one; omen
2.  momentous or ominous significance
3.  a miraculous occurrence; marvel 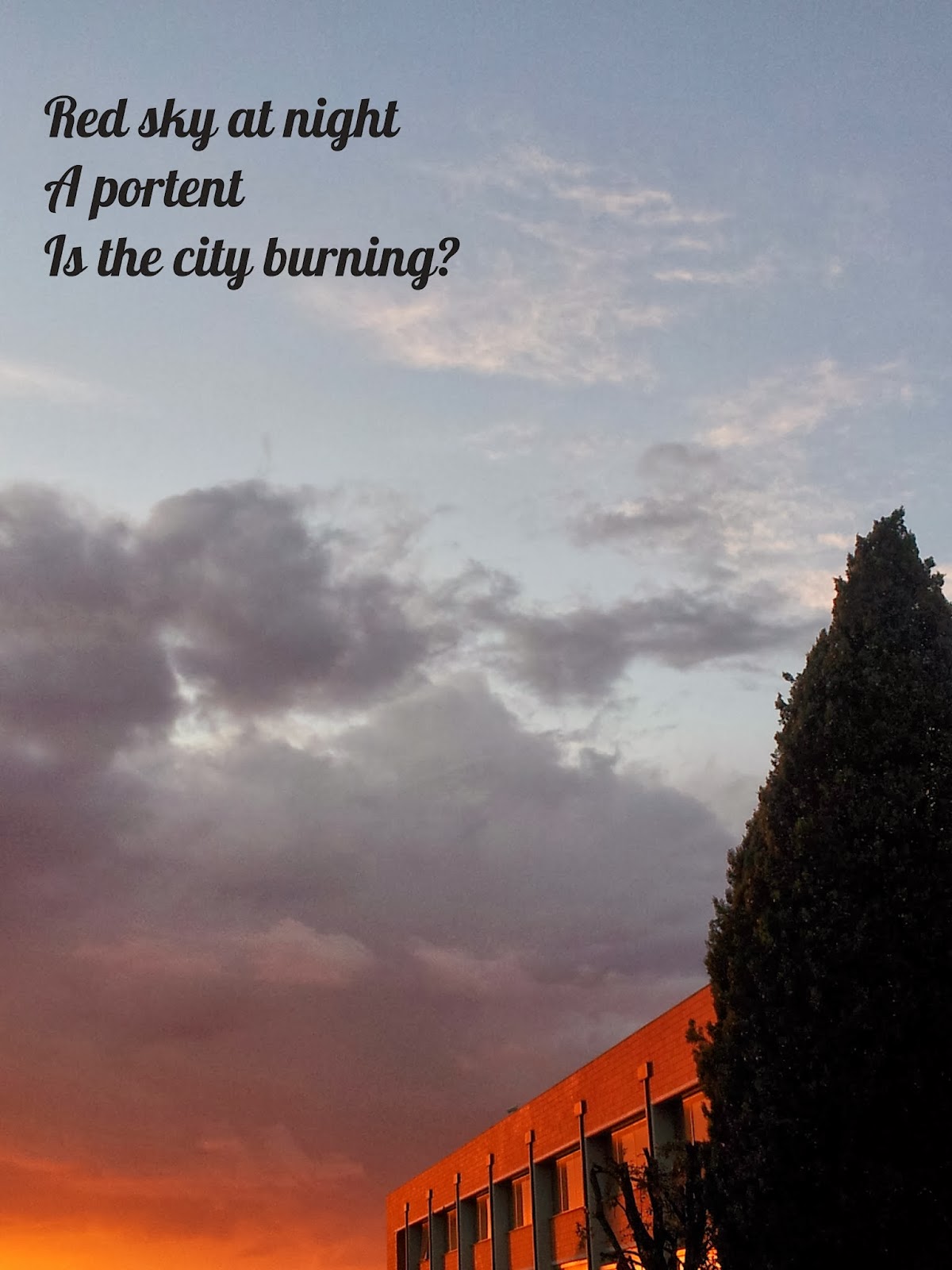 Red sky at night
A portent
Is the city burning?
Posted by spacedlaw at Wednesday, February 26, 2014 No comments: Links to this post