-noun
1 : the representation or assumption of a future act or development as if presently existing or accomplished
2 : the application of an adjective to a noun in anticipation of the result of the action of the verb 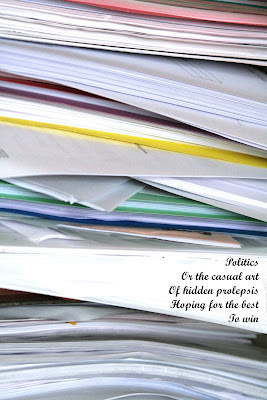 Posted by spacedlaw at Wednesday, October 31, 2012 No comments: Links to this post

-noun
1. the act or process of concocting
2. something concocted
3. an untruth; lie 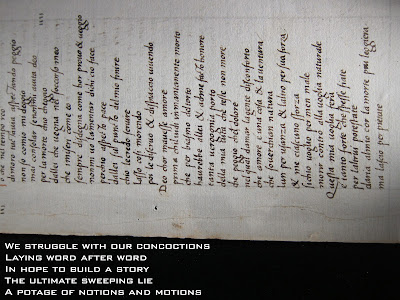 Posted by spacedlaw at Tuesday, October 30, 2012 No comments: Links to this post

-verb (used with object)
1. to hit (someone or something) repeatedly using heavy blows, as with a club or other heavy instrument; beat heavily
2. (often passive) to damage or injure, as by blows, heavy wear, etc
3. social welfare . to subject (a person, especially a close relative living in the same house) to repeated physical violence
4. to subject (a person, opinion, or theory) to harsh criticism; attack

-noun
1. a mixture of flour, milk or water, eggs, etc., beaten together for use in cookery.
-verb (used with object)
2. to coat with batter.

-noun
a player who swings a bat or whose turn it is to bat, as in cricket or baseball.

-noun
1. the slope of the face of a wall that recedes gradually backwards and upwards
-verb (used without object)
2. to have such a slope 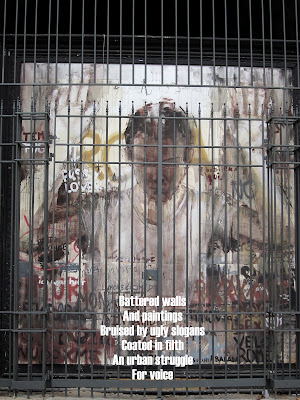 Battered walls
And paintings
Bruised by ugly slogans
Coated in filth
An urban struggle
For voice
Posted by spacedlaw at Monday, October 29, 2012 No comments: Links to this post 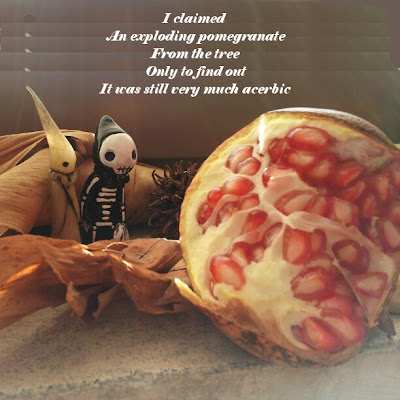 I claimed
An exploding pomegranate
From the tree
Only to find out
It was still very much acerbic
Posted by spacedlaw at Sunday, October 28, 2012 No comments: Links to this post