-noun
1. the oval or round reproductive body laid by the females of birds, reptiles, fishes, insects, and some other animals, consisting of a developing embryo, its food store, and sometimes jelly or albumen, all surrounded by an outer shell or membrane
2. Also called: egg cell  . any female gamete; ovum
3. the egg of the domestic hen used as food
4. something resembling an egg, especially in shape or in being in an early stage of development
5. old-fashioned , informal - bad egg
a. a bad person
b. an exclamation of dismay
6. old-fashioned , informal - good egg
a. a good person
b. an exclamation of delight
7. slang  (chiefly US, Canadian) - lay an egg
a. to make a joke or give a performance, etc., that fails completely
b. (of a joke, performance, etc.) to fail completely; flop
-verb
8. to dip (food) in beaten egg before cooking
9. informal  (US) to throw eggs at

-verb  (usually followed by “on”)
to urge or incite, especially to daring or foolish acts 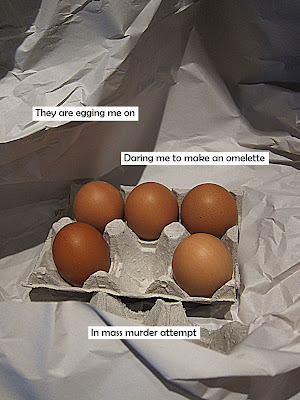 Posted by spacedlaw at Sunday, March 31, 2013 No comments: Links to this post

-adj.
1. badly illuminated: a dim room
2. not clearly seen; indistinct; faint
3. having weak or indistinct vision
4. lacking in understanding; mentally dull
5. not clear in the mind; obscure
6. lacking in brilliance, brightness, or lustre
7. tending to be unfavourable; gloomy or disapproving
-verb
8. to become or cause to become dim
9. (trans.) to cause to seem less bright, as by comparison
10. (US, Canadian) (trans. ) Also called (in Britain and certain other countries): dip . to switch (car headlights) from the main to the lower beam 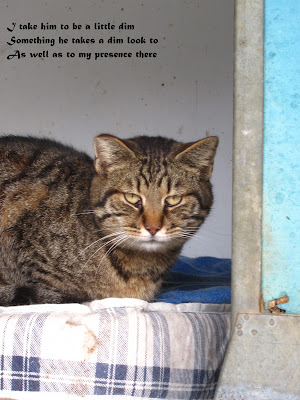 I take him to be a little dim
Something he takes a dim look to
As well as to my presence there
Posted by spacedlaw at Saturday, March 30, 2013 No comments: Links to this post

-noun
1. a. the inundation of land that is normally dry through the overflowing of a body of water, especially a river
b. the state of a river that is at an abnormally high level (especially in the phrase in flood )
2. a great outpouring or flow: a flood of words
3. the rising of the tide from low to high water
4. theatre .  short for floodlight
5. archaic . a large body of water, as the sea or a river
-verb
6. (of water) to inundate or submerge (land) or (of land) to be inundated or submerged
7. to fill or be filled to overflowing, as with a flood
8. (intr.) to flow; surge
9. to supply an excessive quantity of petrol to (a carburettor or petrol engine) or (of a carburettor, etc.) to be supplied with such an excess
10. (intr.) to rise to a flood; overflow
11. (intr.)
a. to bleed profusely from the uterus, as following childbirth
b. to have an abnormally heavy flow of blood during a menstrual period 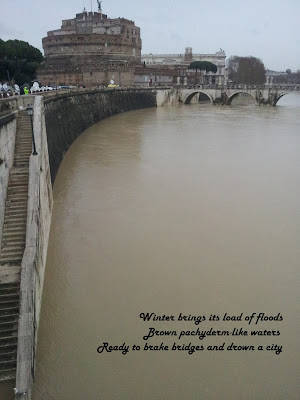 Winter brings its load of floods
Brown pachyderm-like waters
Ready to brake bridges and drown a city
Posted by spacedlaw at Friday, March 29, 2013 No comments: Links to this post