-adj.
1. of, being, or situated at an end, terminus, or boundary
2. of, relating to, or occurring after or in a term
3. (of a disease) terminating in death
4. (informal) . extreme
5. of or relating to the storage or delivery of freight at a warehouse
-noun
6. a terminating point, part, or place
7. a point at which current enters or leaves an electrical device, such as a battery or a circuit
8. a conductor by which current enters or leaves at such a point
9. (computing) . a device having input/output links with a computer but situated at a distance from the computer
10. (architecture)
a. an ornamental carving at the end of a structure
b. a sculptured post, in particular one in the form of an armless bust or an animal on the top of a square pillar (also called “term”)
11. a point or station usually at the end of the line of a railway, serving as an important access point for passengers or freight
12 a less common name for terminus
13. a purpose-built reception and departure structure at the terminus of a bus, sea, or air transport route
14. a site where raw material is unloaded, stored, in some cases reprocessed, and reloaded for further transportation, in particular an onshore installation designed to receive offshore oil or gas from tankers or a pipeline
15. (physiology)
a. the smallest arteriole before its division into capillaries
b. either of two veins that collect blood from the thalamus and surrounding structures and empty it into the internal cerebral vein
c. the portion of a bronchiole just before it subdivides into the air sacs of the lungs 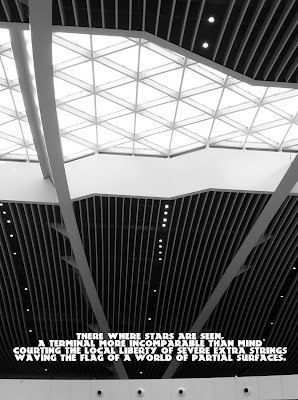 There where stars are seen,
A terminal more incomparable than mind
Courting the local liberty of severe extra strings


Waving the flag of a world of partial surfaces.
Posted by spacedlaw at Friday, May 19, 2017