–verb (used without object)
1. to growl threateningly or viciously, especially with a raised upper lip to bare the teeth, as a dog.
2. to speak in a surly or threatening manner suggestive of a dog's snarl.
–verb (used with object)
3. to say by snarling
–noun
4. the act of snarling.
5. a snarling sound or utterance.


–noun
1. a tangle, as of thread, hair, or wire.
2. a complicated or confused condition or matter.
3. a knot in wood.
–verb (used with object)
4. to bring into a tangled condition, as thread or hair.
5. to render complicated or confused.
6. to raise or emboss, as parts of a thin metal vessel, by hammering on a tool (snarling iron) held against the inner surface of the vessel.
–verb (used without object)
7. to become tangled; get into a tangle. 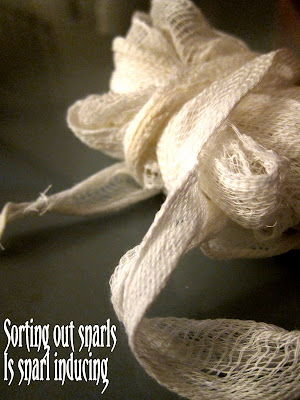 Sorting out snarls
Is snarl inducing
Posted by spacedlaw at Wednesday, August 10, 2011