-noun
1. the limits within which a person or thing can function effectively
2. the limits within which any fluctuation takes place
3. the total products of a manufacturer, designer, or stockist
4. (ballistics)
a. the maximum effective distance of a projectile fired from a weapon
b. the distance between a target and a weapon
5. an area set aside for shooting practice or rocket testing
6. the total distance which a ship, aircraft, or land vehicle is capable of covering without taking on fresh fuel
7. (physics) . the distance that a particle of ionizing radiation, such as an electron or proton, can travel through a given medium, like air, before ceasing to cause ionization
8. (mathematics , logic)
a. (of a function) the set of values that the function takes for all possible arguments
b. (of a variable) the set of values that a variable can take
c. (of a quantifier) the set of values that the variable bound by the quantifier can take
9. (statistics) . a measure of dispersion obtained by subtracting the smallest from the largest sample values
10. the extent of pitch difference between the highest and lowest notes of a voice, instrument, etc
11. (US and Canadian) . an extensive tract of open land on which livestock can graze
12. the geographical region in which a species of plant or animal normally grows or lives
13. a rank, row, or series of items
14. a series or chain of mountains
15. a large stove with burners and one or more ovens, usually heated by solid fuel
16. the act or process of ranging
17. (nautical) . a line of sight taken from the sea along two or more navigational aids that mark a navigable channel
18. the extension or direction of a survey line, established by marking two or more points
19. a double-faced bookcase, as in a library
-verb
20. to establish or be situated in a line, row, or series
21. (trans; often reflexive ; followed by “with”) to put into a specific category; classify
22. (followed by “on”) to aim or point (a telescope, gun, etc) or (of a gun, telescope, etc) to be pointed or aimed
23. to establish the distance of (a target) from (a weapon)
24. (intr.) (of a gun or missile) to have a specified range
25. (when intr., followed by “over”) to traverse (an area); roam (over)
26. (intr. ; followed by “over”) (of an animal or plant) to live or grow in its normal habitat
27. (trans) to put (cattle) to graze on a range
28. (intr.) to fluctuate within specific limits
their ages range from 18 to 21
29. (intr.) to extend or run in a specific direction
30. (trans.) (nautical) . to coil (an anchor rope or chain) so that it will pay out smoothly
31. (intr.) (nautical) . (of a vessel) to swing back and forth while at anchor
32. (trans.) to make (lines of printers' type) level or even at the margin 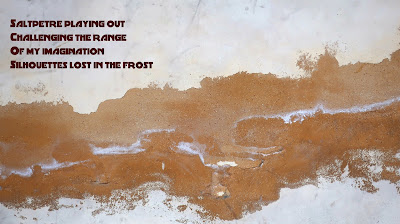 Saltpetre playing out
Challenging the range
Of my imagination


Silhouettes lost in the frost
Posted by spacedlaw at Tuesday, November 14, 2017