noun
1.The act of coaxing someone, usually through insult, into initiating a swordsman's duel, and subsequently killing them with superior skill.
2.One who performs such an act. 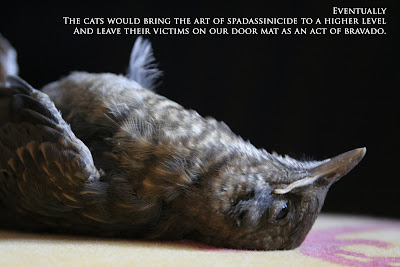 Eventually
The cats would bring the art of spadassinicide to a higher level
And leave their victims on our door mat as an act of bravado.
Posted by spacedlaw at Sunday, November 09, 2008

My cat caught a house finch today. I asked her what she had; she opened her mouth to tell me, and the bird flew away. I really am sad to see a picture of a dead bird.